An Introduction to Geothermal Heating 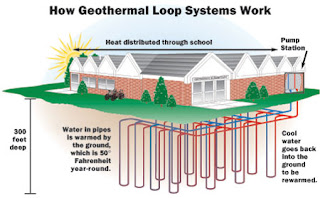 One of the fastest growing sectors of renewable energy resource development is the wide and varied field of Geothermal Heating. No matter the type you choose to match your needs and location, a geothermal installation can be made completely sustainable and is very scalable. It is likely that the future of geothermal energy will find some aspect of it found in every home as part of a varied renewable energy package.
Boiled down to its most basic elements, geothermal energy is generated when the heat of the Earth itself (or submerged magma near reservoir cavities) is used to directly heat water. The water acts as a conduction medium, bringing the heat to another location. One may also use superheated steam to generate electricity by spinning an industrial sized turbine. The water may also be used directly to heat, as is the case in greenhouses with hot water pipes under plant benches.
Geothermically heated waters have been used for at least the last 2,000 years, maybe longer, as the Roman baths found throughout the former Empire can attest to. There was a revival of heated bathing culture in the mid- to late 19th century that saw the creation of countless "healing water" spas. By the 1920s those areas were popular enough that they needed electricity for street lamps and electricity around these often rural destinations, usually flanked by mountains.
The Geysers geothermal power station in northern California was once the site of one of the world's first geothermic power plants, though they were very inefficient. Later, when the spa fell out of fashion, the site became home to no less than 21 industrial turbine generators that make it the largest such facility in the world. Indeed, though Iceland produces more geothermal energy than the US per capita, the output of the US dwarfs the tiny, island nation.
Improvements in generator design have caused there to be a few typical designs for geothermal generators. The oldest type is called "dry stem" and simply uses the steam as it comes out in a single chamber system that turns the turbine. The more modern and efficient method of using what is called a "binary cycle" and two chambers has been very successful and many generators are switching over when they receive overhaul work. Here, either the superheated water itself or another fluid is allowed to undergo pressure changes that instantly turn it into a vapour, thus turning the turbines with each "stroke," like a combustion engine.
One of the most exciting developments in the production of geothermal power is the relatively new practice of injecting reclaimed water into spent vents or heated cavities commonly referred to as, "hot, dry rocks." The water is pumped in while it is still capped, to allow the pressure to grow. It is usually pumped in cold in the hopes that the difference between the water and the rock temperatures will cause further fissures to open up and increase the volume of the cavern to be filled. When new holes are driven in to the rejuvenated geothermal well, the site will usually operate indefinitely as long as there's available water.
Roughly one quarter of North America is capable of supporting any actively heated sites, such as those where hot springs are naturally found. The central and eastern part of the country are still able to use geothermal energy to heat and cool homes and businesses, but their options are limited to passive technologies such as the heat pump. Here, water or glycol is injected into pipes and circulated underground to exchange the heat or absence of it with the constant temperature of the ground outside. Such systems are always closed when they simply circulate underground, but may also be open systems that have intake and outtake pipes submerged deep into a nearby lake or pond.
These passive systems have the advantage of being suitable for homeowners everywhere, having hardly any moving parts that can break and quietly bringing your home to equilibrium with the ambient temperature of the Earth in your area. For those living in climates that get very cold in the winter, this can be the difference between heating your house from 50 to 70F (10-20C) rather than from a typical sub-zero base.
For those looking to investigate how to fit geothermal heat into their sustainable power system, there several organizations that provide detailed information on the topic as part of their advocacy mission.
The next century will surely see a wide expansion of the various geothermal technologies, if for no other reason than it's predicted affordability within even just a few years. As the benefits of geothermal heating and energy production become more widely known, it is certain that heat pumps will become as ubiquitous as wind turbines and solar panels.
If you live in the South Bay Area of California and are interested in geothermal heating for your house or business building then please schedule an appointment with one of our experienced technicians at Sandium.Com
Steven Ross owns and operates [http://www.geothermalheatingreport.com] where you can read many additional articles about Geothermal Heating [http://www.geothermalheatingreport.com]
Article Source: http://EzineArticles.com/?expert=Steven_P._Ross
Posted by Sandium: Heating & Air Conditioning Experts at 11:54 AM

Hi there! Thank you for sharing your thoughts about Geothermal in your area. I am glad to stop by your site and know more about Geothermal. Keep it up! This is a good read. I will be looking forward to visit your page again and for your other posts as well.
The binary cycle power plant was first demonstrated in 1967 in Russia and later introduced to the USA in 1981, following the 1970s energy crisis and significant changes in regulatory policies. This technology allows the use of much lower temperature resources than were previously recoverable. In 2006, a binary cycle plant in Chena Hot Springs, Alaska, came on-line, producing electricity from a record low fluid temperature of 57°C (135°F).
Know the benefits of switching to Geothermal MA

Thanks for the great intro! Looking into lethbridge heating so I appreciate your help!

Geothermal system is packed with a number of advantages, particularly economic. The key economic advantage of a geothermal cooling and heating system is that it is highly energy efficient. For every unit of energy that it utilizes, it produces 2.5 to 3.5 units of heat.