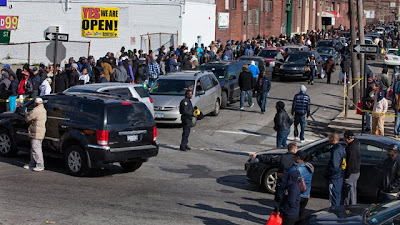 
By now we’ve just about all witnessed the pictures of houses entombed within sand along the Jersey Coast, burned-out properties within Queens, as well as immersed subway stations in Manhattan. Those breathtaking photos were in the initial wave of media from Superstorm Sandy the end of October.

The 2nd, residual consequences might not be as spectacular, but they are nonetheless extremely substantial. And they display, ever so clearly, our need for better resilience. As of late-afternoon Sunday, Nov fourth, there were still 1.8 million people without having electricity, the vast majority of these people within New York and New Jersey. That’s lower from 8.5 million without having electrical power at the peak, but it still involves nearly a quarter of New Jersey. In some places black outs may last for several weeks.

Failures around August in New Jersey aren’t so terrible - there might be some irritation from the high temperature, but few at true risk of safety -- but with conditions falling into the thirties earlier this week, power outages turn out to be very severe. The vast majority of our home heating systems have to have electrical power to operate - for the fans, pumps, and controls -- though there are some exceptions.

Along with these kinds of clear challenges regarding energy outages - lack of , heat, and home appliances - power outages impact all of us outside the house as well.

As we realized within New Jersey and Long Island, without having electrical power most gas stations can’t run. The American Automobile Association calculated early November that 60% of service stations throughout New Jersey and 70% on Long Island were closed down because they don’t have power to pump gas. Only 23% of New Jersey service stations were still with no power by Sunday morning, but lines continued in many locations.

There were in addition actual gas shortages, which contributed to the problems. The U.S. Department of Energy announced that thirteen of the region’s thirty three gas terminals had been closed as a result of the hurricane, along with 2 main gasoline pipelines serving the area.

Without gas, we can’t run our vehicles. But those shortages also meant that home owners with more compact, gasoline-powered generators were running out of gas.

The solutions to these problems are many-faceted. Relative to the need for power generators, we should develop better resilience in to our homes. All homes should be able to sustain livable conditions in the event of loss of power or home heating fuel. This is a familiar refrain of mine.

We can do this with much better building envelopes (substantially greater insulation levels, triple-glazed glass windows, tighter construction) and also passive solar gain. By using these features, temperatures in these houses should never fall beneath forty five or fifty degrees Fahrenheit, even during the heart of winter season if there’s absolutely no power and our home heating systems can’t operate.

Relative to fuel shortages and also the inability to pump gasoline in the course of outages, we can obtain increased resilience by reducing our dependence on the automobile. This isn’t a quick fix, however by means of participation in local preparation efforts and by influencing transportation funding priorities, we're able to create a lot more pedestrian-friendly spaces that let people to reach key services safely on foot or simply by bike.

If we develop communities which will function reasonably well without having cars during times of emergency situations, those will be places where automobile use might also decrease during ordinary times. These are going to be cleaner, more secure, much healthier places that move all of us toward sustainability.

Resilient design is where we should be headed. It's an integrated method that can keep us all safer and enable us to recover faster from no matter what the next disruption may be.